In the previous post (PDAF at a glance), we summarised some of the basic ideas behind VILP and PDAF also covering certain issues on the allocations for CY 2007-2009, and the actual releases made.

Here, I am more interested in looking at the NGO-legislator relationships. One of the observations of the COA team is that

The implementation of most of the livelihood projects was not undertaken by the IAs themselves, but by the NGOs endorsed by the legislators, inspite of [sic] the absence of any appropriation law or ordinance as required under GPPB Resolution No. 12-2007.

It would be interesting to see, if there are any, the relationships between the NGOs and the solons. Annex A in the SAO report provides a list of the NGOs (mostly endorsed by the sponsoring legislators) and the amounts released to them by the implementing agencies (IA) in CYs 2007-2009. The table has the following information: NGO, IA, legislator, amount (released by legislator), projects (# and total amount).

Snapshot of Annex A

I only have the secured .pdf copy of the said report. It did take me some time to restructure the dataset in .csv form. I spent a significant amount of time restructuring the data (compared to writing the code to set up some visualisations).

A network visualisation of the table provided in Annex A of the Service Audit Report of COA (for CY 2007-2009) was created. A network has, in general, two elements: the Nodes and the Edges (links). The nodes represent the entities in the set, while the edges represent relationships. Having a network visualisation can help highlight interesting patterns within a dataset. What I have set up in this post is a bipartite network — a network with two (2) types of nodes: NGO (red nodes) and Legislator (blue nodes). A link is drawn between an NGO-node and a Legislator-node if they are “involved” in the same project. In the snapshot of Annex A above, for example, we have the link: AFPI-Jose Carlos V. Lacson. Moreover, the links and the nodes are weighted. Thicker lines between two nodes indicate more project involvement. Furthermore, both the NGO-node and the Legislator-node are weighted based on the (total) amounts allocated to the NGO through the releases by various legislators (for the NGO-node), and on the total amounts released by the legislator across NGOs he/she is involved in (for the Legislator-node).

Below, is the full-network representation of the table provided in Annex A. 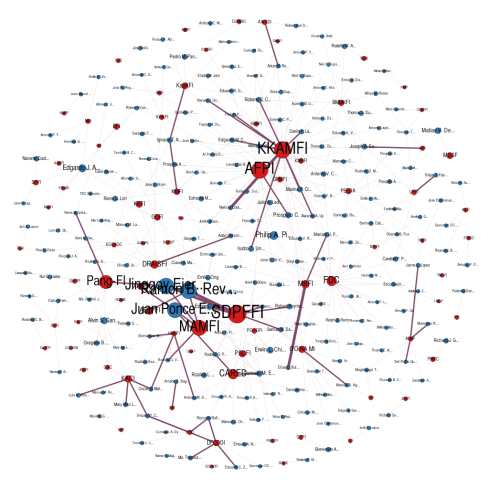 The full bipartite network generated from Annex A of the SAO report by the COA. The red nodes represent NGO-nodes, while the blue nodes represent Legislator-nodes. The size of the nodes show the total amount associated to the nodes.

Here’s a peek at my data laboratory. The cases are sorted by the amount received (NGO-node)/released (Legislator-node). 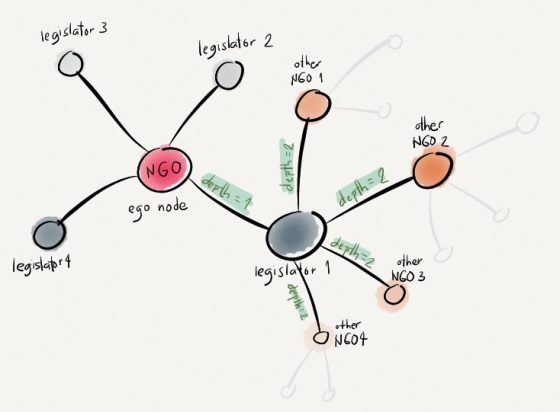 Below are the actual networks generated from the data provided in Annex A. 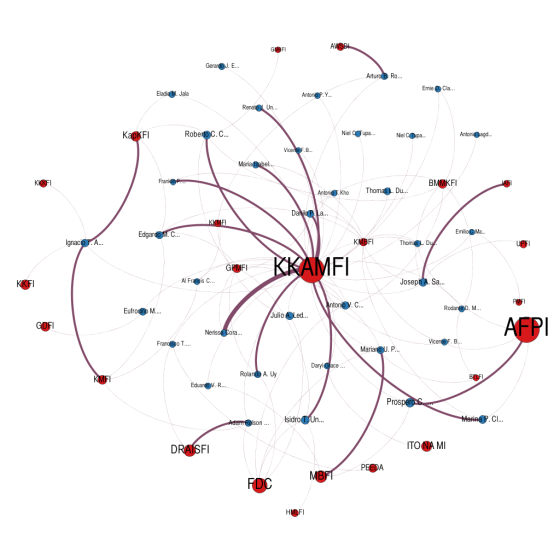 2 comments on “Network Patterns in Pork”