I would like to believe that it’s never just about ebony nor ivory; there is a spectrum… and I am somewhere in between.

For example, why didn’t I join the $APM frenzy the last time it went surging, despite the **clear** momentum it displayed after its first rally? On the other hand, why did I decide to nibble some $EG shares? I don’t remember anyone hyping about it, except… well, me and a few of my colleagues. Why didn’t I join the über demented roller-coaster ride $CAL buckled down to the fanatics? Ermm… I’m so embarrassed about this, but CAL and I had a bit of an intra-day fling. Promise, it only happened once! Finally, someone just asked me about $OV. Yes, I am still holding on to it and $OPM, and some other mining stocks for quite a while now — some for more than a year even.

Am I a trader or an investor? You see, humans are adaptive, I don’t think there’s ever gonna be a straightforward answer to that. Besides, I enjoy playing Baccarat. 🙂 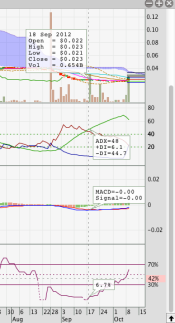 Meanwhile, let’s talk about $EG. I started noticing it near the end of September when two of my colleagues pointed it out to me. It most certainly had gotten a good beating in the past few months. Errm. Sorry, that’s an understatement. Quantitatively, it’s currently down by 90.30% in its 1-Yr Rtn.

Anyway, I looked at its chart and read some news clips here and there. I also read a clip that compares $EG’s stat and performance this year against its stat and performance in the same period a year ago. I was convinced that if only I were patient enough to hold on to the stock, I would be rewarded. My gut told me that “yes, it is cheap at its current price, and it has potential.” Looking at its chart, seeing the surge in the volume, I knew that it was only a matter of time before it breaks out. After selling all my $CAL shares, I embarked on a journey with $EG.

Earlier, it reached the ceiling (+50% from its closing yesterday). As of this writing, it is still up there at 0.039/sh with 345,700,000 bids! Needless to say, the momentum is there! To those who are currently holding on to this stock, make sure to secure some gains. To those who still don’t have it but hope to join the ride soon, I strongly suggest that you think about the risks first. Think $CAL and $APM. Yes, it was cheap last week; now, I’m not so sure. We don’t want anyone getting whipsawed.

I honestly didn’t think it was going to “break out” in this manner. I never wanted for it to reach the ceiling because, you know, there has been a pattern — and it’s becoming a trend nowadays. Before we know it, CMIC is already probing the company and some of its stakeholders. Huwag naman sana. Kaya, konting ingat.

This entry was posted on October 10, 2012 by E in Stock Trading and tagged ceiling, CMIC, EG, OPM.